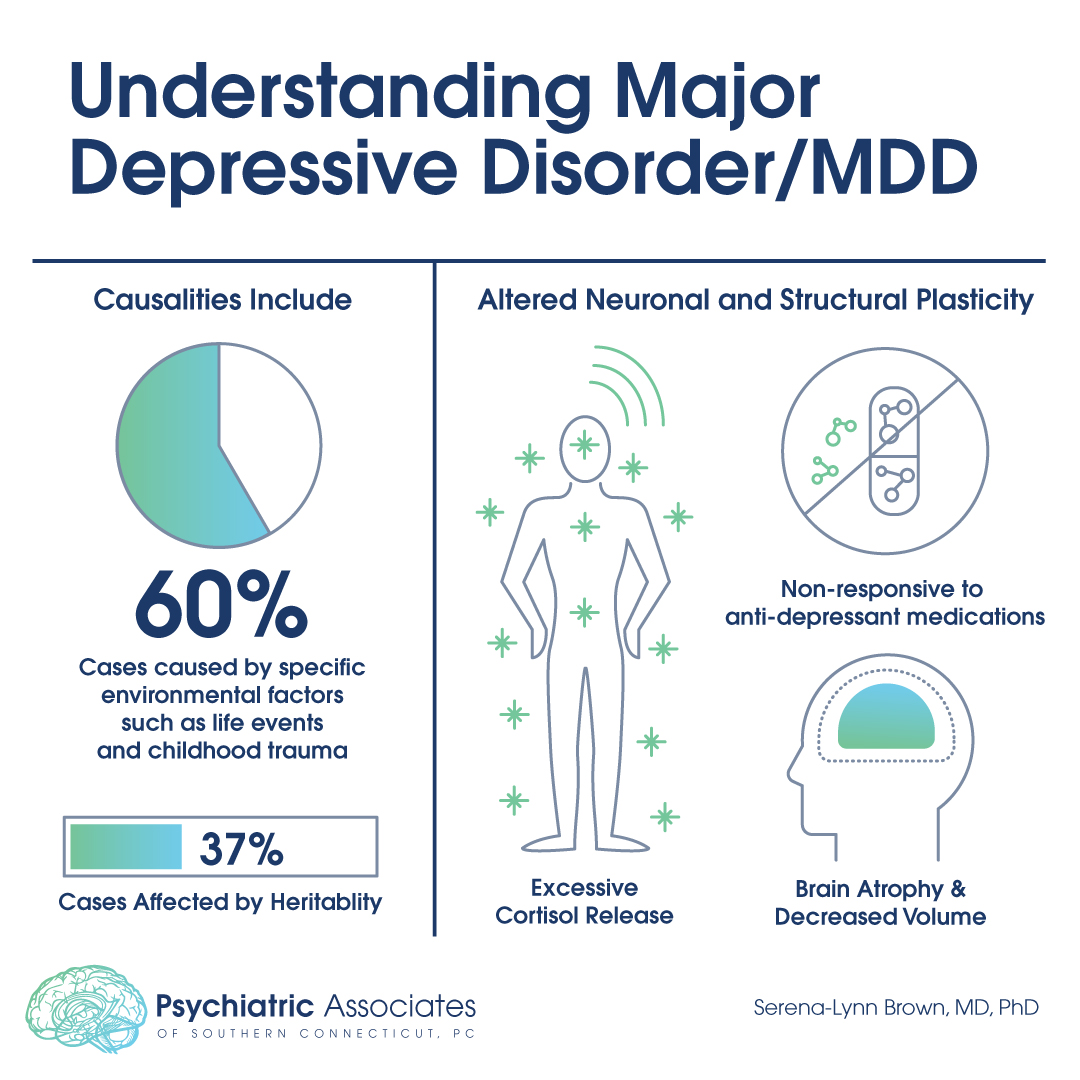 The understanding and treatment of Major Depressive Disorder (MDD) is a significant public health issue, not only in the United States but across the world.  However, after almost half a century of research, we still do not understand the exact mechanism by which this disorder acts. Twin data show that genetic factors (heritability) only explain 37% of cases. That suggests that approximately 60% of depression may be caused by specific environmental factors. Studies have identified stressful life events and childhood trauma as risk factors for MDD.

Over the years, it has become obvious that, while a number of depressed patients respond to antidepressant medications, many do not. How do we explain this? And how do we understand the mechanism by which newer treatments such as Transcranial Magnetic Stimulation (TMS), ketamine, and (potentially) psilocybin work in the brain?

The neuroplasticity theory of depression suggests that patients with MDD have altered neuronal and structural plasticity (the ability to change, grow and reorganize quickly). Put simply, areas of the brain that have been implicated in depression have shown atrophy and/or decreased volume by brain imaging.  This has been confirmed by electron microscopy studies in animal models of depression and stress.

There is a large body of evidence suggesting that ongoing stress is associated with a high risk for developing MDD. Patients with this disorder have been shown to have an increased rate of hypothalamus-pituitary-adrenal (HPA) axis abnormalities, including the secretion of higher levels of cortisol (the “stress hormone”). Interestingly, stress appears to decrease expression of brain-derived neurotrophic factor (BDNF) in the brain in areas implicated in depression. Antidepressants and other treatments appear to reverse the effects of stress.

The neurotrophic model of depression, based upon a body of clinical and preclinical studies, proposes that neuroplasticity is regulated by factors such as BDNF. Stress decreases the expression of BDNF in areas of the brain associated with mood (like the limbic system).  Decreased BDNF can contribute to atrophy of limbic brain structures, but the neurotrophic effects of antidepressants and other newer treatments such as TMS can reverse this atrophy and cell loss.

So, genetics and environment appear to play major roles in MDD. While changes in brain structure and function occur in this disorder, these changes appear to be reversed with a variety of treatments. And more research is needed, but it appears that the neuroplasticity theory of MDD goes farther to explain this disorder than any of the previous, more simplistic theories of neurotransmitter inhibition.

Am I Depressed or Am I Anxious?

COVID-19 Triples Incidence of Depression in the U.S.