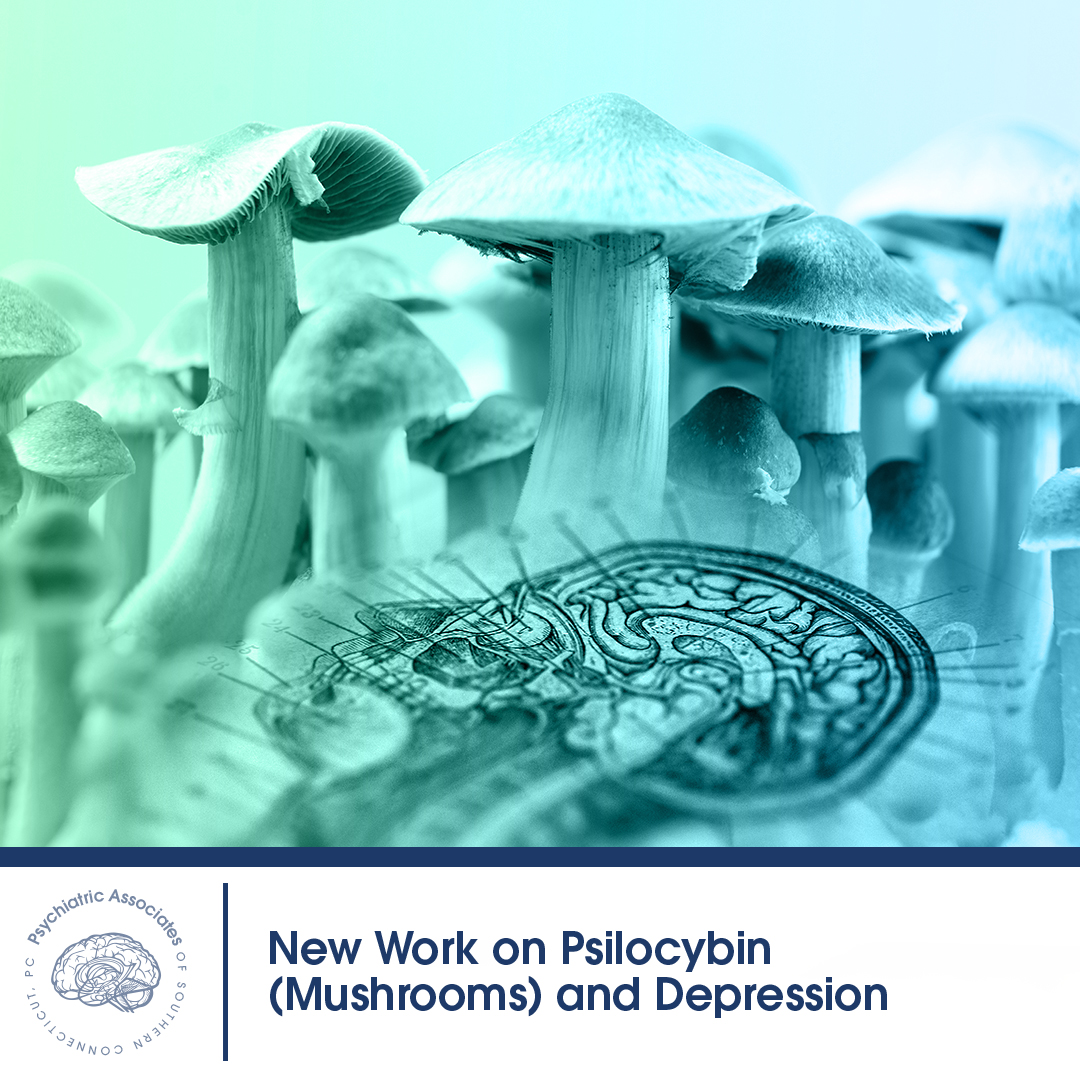 Since April, when the New England Journal of Medicine (NEJM) published the paper “Trial of Psilocybin versus Escitalopram for Depression (NEJM, Carhart-Harris et. al, 4/5/21), people with depression are wondering if psilocybin is a good treatment for them.

Scientific research on psychedelics has been going on since the 1960s. As the flower children of that decade discovered the psychedelics and used them recreationally, the FDA made them illegal, which decreased the amount of research that could be done. However, in the past few years there has been a resurgence of interest in using psychedelics such as psilocybin, LSD, MDMA and ayahuasca to treat disorders such as depression and PTSD.

The most recent study, published in the prestigious NEJM, shows that, in a small sample of patients with treatment refractory depression, psilocybin worked at least as well and possibly better than escitalopram over a 6 week period. This trial involved 59 patients and followed them over 6 weeks. The authors said that they couldn’t extend the study beyond 6 weeks, when the escitalopram might start working, because some of the patients had come off their antidepressants during the study and needed to go back onto them. The study couldn’t be truly blind, because the volunteers receiving psilocybin hallucinated, while the ones receiving placebo didn’t.

So, in a study looking at treatment refractory depressed patients, who wouldn’t be expected to respond to escitalopram alone, and definitely not so quickly, psilocybin worked at least as well at week 6. How about at week 12, 24, 48? We don’t yet know.  But major medical centers such as Yale and Johns Hopkins have set up psychedelic research programs to see if these compounds will work, at least in the short term, similar to ketamine.

Interestingly, these psychedelics, like many of the antidepressants, have effects at  the serotonin receptors. But research is now moving beyond the simplicity of which receptors are involved in which psychiatric illnesses to “connectome” hypotheses, and how neuroplasticity may also play a prominent role in how these illnesses occur and how we find treatment that lasts.

If you look at the whole picture, you can then ask why novel treatments like Transcranial Magnetic Stimulation (TMS) also work for treatment-refractory depression? According to Dr. Paul Albert (https://doi.org/10.1503/jpn.190072):

Neuroplasticity involves synaptic reorganization in response to environmental stressors or rewards and is thought to underlie our ability to adjust, learn and remember.7 However, in mental illness, it is thought that maladaptive plasticity occurs, resulting in persistence of the depressive symptoms, such as rumination, anhedonia and others.8 By harnessing corrective neuroplasticity it may be possible to reprogram the maladaptive behaviour and produce long-lasting remission. Both pharmacological and brain stimulation antidepressant approaches may act by inducing corrective neuroplasticity to mediate remission. Increasingly, antidepressant effects on neuroplasticity are shown to correlate with behavioural improvement, both in human and in animal models, raising the possibility that neuroplasticity could provide a new avenue for depression research. However, learning how to harness this capacity to enhance recovery remains a challenge.

Next week I will discuss more about neuroplasticity and the connectome theory of the brian.

Trial of Psilocybin versus Escitalopram for Depression
https://www.nejm.org/doi/full/10.1056/NEJMoa2032994

Am I Depressed or Am I Anxious?

COVID-19 Triples Incidence of Depression in the U.S.